Davido’s crew member, Obama DMW has dragged Wizkid over his recently released album “Made In Lagos”

Wizkid finally released his highly anticipated 5th body of work, “Made In Lagos” a couple of hours ago, and it’s been nothing but rave reviews from music fans worldwide.  However, Davido’s assistant, Obama DMW seems to have a negative review about the album. According to him, “Made In Lagos” is nothing but an overhyped rain., He added that the EP of DMW artiste, Ayanfe is better than the album.

Taking to his Twitter page, he wrote; “If I hear” Made in? Ayanfe EP is more than this overhyped rain!! Lol #fem and #EndSARS“. In another post, via his Instagram page he called the album wack. “Brother your album is wack!! You fall hands, SMH”

If I hear” Made in? Ayanfe EP is 🔥 more than this over hyped rain!! Lol #fem and #EndSARS 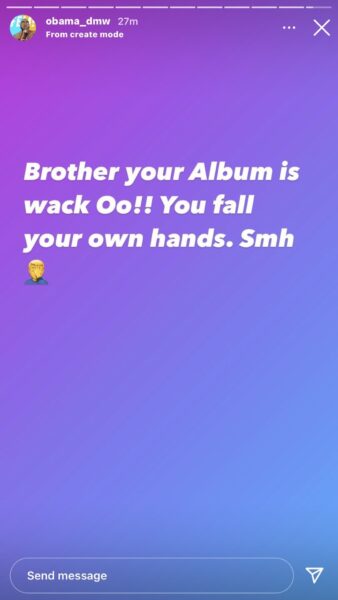