Do You Agree? ‘The Only Thing In This Country That Gives People Joy Is Entertainment’ – Singer Mr 2Kay

Nigerian singer, Mr 2Kay, has stated that the only thing that gives Nigerians joy and hope is entertainment.

This statement is an offshoot of the present discussion on SARS/SWAT and police brutality.

“The only thing in this country that gives people joy and hope is entertainment. #EndSWAT #EndSARS #EndPoliceBrutality”

Mr 2Kay also took to the streets of Port Harcourt alongside reality TV star, Tacha, to protest against police brutality despite the ban by Governor Wike.

“IF U GO KILL US KILL US.. I MARCH WITH MY PEOPLE AS A YOUTH FOR RIVERS STATE #EndPoliceBrutalityinNigeria #PhProtest“, he tweeted on Tuesday morning. 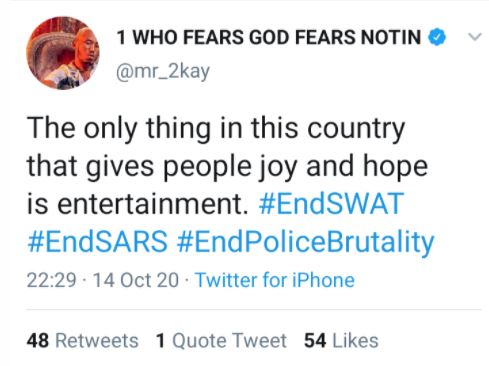