Nollywood actress, Eniola Badmus has taken to Instagram to dismiss reports that she was shot during the Lekki toll gate gun attack on End SARS protesters on Tuesday night, October 20.

We had reported that some Military men on Tuesday allegedly attacked End SARS protesters at the Lekki toll gate.

It was also reported that bullets fired by military personnel hit some persons and at least one person has been reported dead and many injured.

Following the incident, a video making on the internet sparked reports that the actress was among those who were shot at the venue.

According to her, she couldn’t join the protest on Tuesday.

“Against all speculations about me being shot or dead at the unspeakable incident that happened at the toll gate a few hours ago, I would like to inform you guys that I Eniola Badmus is hale and hearty.

“In fact, I couldn’t make it there today to lend my voice to the End SARS movement.

“But in truth, I am broken and scattered to see what my country has become. We are tired and it’s becoming one time too many, how is it wrong to demand for our rights/expectations and be killed at it. How? 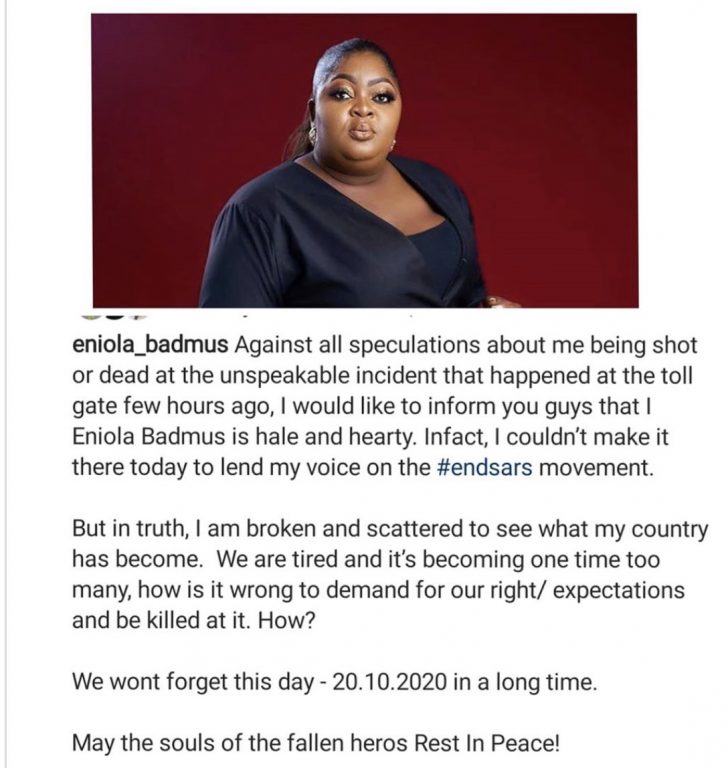 Simi Gave Her Response After Getting Dragged For Her Yummy Outfit