MUSIC STAT!! Wizkid’s ‘Made In Lagos’ Continues To Break Record; Crosses 10M Streams On Spotify In A Day

The newly released album of Wizkid, ‘Made in Lagos’, has shattered a new record by amassing over ten million streams on Spotify in just 24 hours of its release.

Melodygist earlier reported that the fourteen-track critically-acclaimed album peaked at number one on the UK Apple Music Albums chart on the first day of its release, beating Sam Smith’s ‘Love Goes’ and Ariana Grande’s ‘Positions’ to occupy the spot. This feat is a new one for any Nigerian artist.

Many celebrities, including former Senate President Bukola Saraki and rumored rival Davido took time to repost the album and congratulate the StarBoy Entertainment leader for his new body of work.

See the proof below: 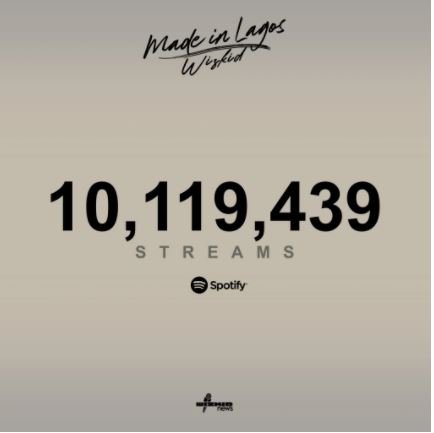 Check This  If Wizkid’s “Made In Lagos” Has 100M Streams In 9 Days – How Long Will It Take Davido’s “A Better Time” To Have Same?
wizkid