Noble Igwe, AY Makun Clash On Twitter Over Comedians Who Invite Politicians To Their Shows

Popular figures, Noble Igwe and AY Makun, have clashed on Twitter owing to the former’s tweet that comedians allow politicians to come to their shows and pay for expensive tables.

AY Makun, who is a stand-up comedian, then took it upon himself to defend himself and his colleagues. He replied Noble Igwe thus:

“A comedian was with d people at Lekki Tollgate while u were busy tweeting last night. Today is not d day to discuss a baseless tweet. I will still love you like a brother & educate you later on the principles of buying and selling. Gucci never asked hushpuppi his sources of income”

“You know what’s funny? Same way I twitted about bloggers, musicians and comedians, the same thing I said about all of us taking power into our hands but you decided to tweet these things and still say ‘I still love you’ Carry on!”

See their exchange below: 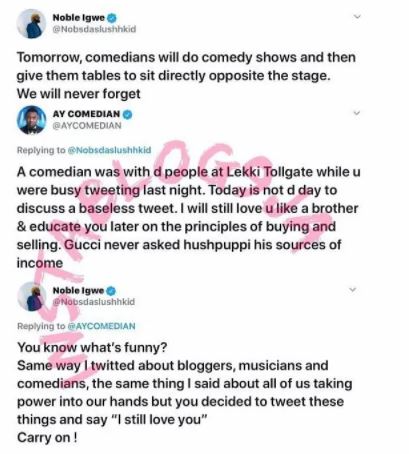