0
Spread the love by sharing this post
Read Time:35 Second

Nigerian indigenous rapper, Olamide reacted after a fan pleaded with him to try and get Wizkid and Davido to work on a track together.

The rapper, who recently released his 11th studio album, “Carpe Diem” had an interactive session with his fans via Twitter on Wednesday.

A fan used the opportunity to call on the rapper to mediate for peace between Davido and Wizkid so they can collaborate on a track.

Olamide replied the fan saying the two artiste will be alright and they both have ‘choko’ in their heads.

“Dem go de alright lol two of them get choko but trust me they are both amazing beings”, the rapper tweeted.

See the tweets below: 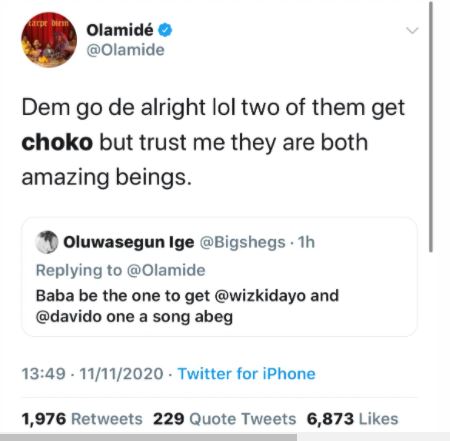